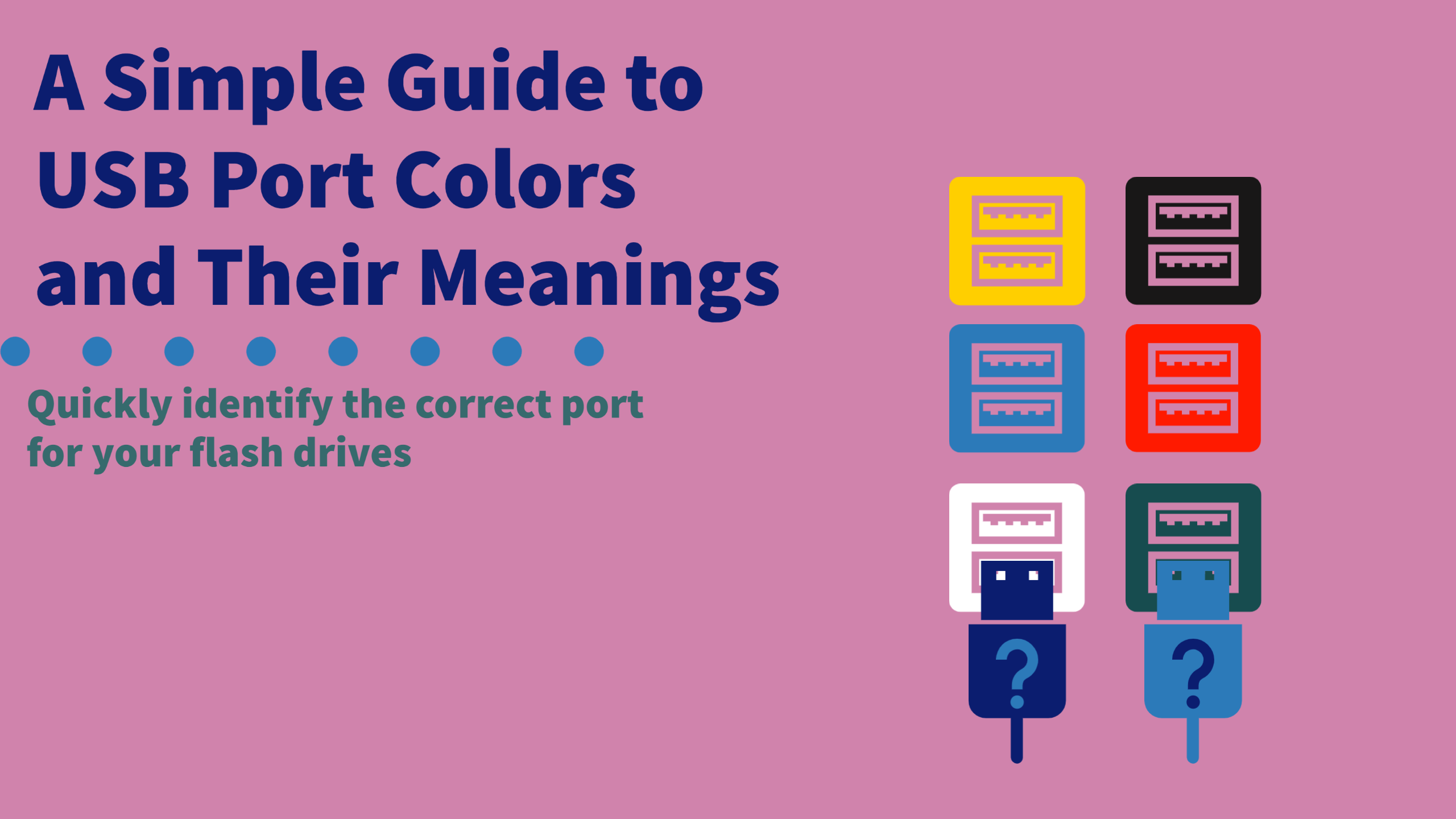 A Simple Guide to USB Port Colors and Their Meanings

When you're looking at a row of USB ports, they all look pretty much the same. But did you know that each color represents a different type of connection? Here's a quick guide from the USB Memory Direct team to help you make sense of it all.

The white USB port is also known as USB 1.X. Introduced in 1996, it is the oldest USB port type and was originally developed for keyboards, mice, and other low-speed devices.

Its transfer speed starts at 1.5 Mbps and can reach 12 Mbps at full bandwidth. Additionally, the data can only be transferred in one direction. Due to the bandwidth needs of modern devices, this type of USB port is usually only found in older computers.

Also known as USB 2.0, the black USB port was introduced in 2000. It is significantly faster than the white USB port, with a data transfer speed of up to 480 Mbps. However, it can still only transfer data in one direction.

The black USB port offers all of the features of the white USB port but with greater reliability. It can be used with a range of devices, including keyboards, mice, microphones, speakers, digital cameras, CD-RWs, external HDDs, DVDs, and flash drives.

The blue USB port is also known as USB 3.0 or SuperSpeed (SS) USB. It was introduced in 2008 and offers a data transfer speed of up to 5 Gbps, which is more than 10 times faster than USB 2.0. In addition, it can transfer data in both directions simultaneously.

The blue USB port is also backward-compatible, meaning it can be used with devices that only support USB 2.0 or 1.X. However, the data transfer speed will be limited to the capabilities of those devices. This type of USB port supports our USB-A connectors, which is the connector type that most people associate with USB connectors. Learn more in our guide to USB-A vs USB-C connectors.

It is backward-compatible and can be used with devices that only support USB 3.0, 2.0, or 1.X. Additionally, it supports duplex communication, meaning data can be transferred in both directions simultaneously.

The red USB port is generally classified as USB 3.2, which was released in 2017. However, it can also be used to indicate a USB 3.1 Gen 2 port. Its transfer speed can reach up to 20 Gbps, which has made it the fastest of all USB ports for many years. This type of port can sometimes be orange instead of red.

In the past, you would generally only find this type of USB port in high-end motherboards. However, it is quickly becoming more common in everyday electronics as the demand for faster data transfer speeds increases. For example, our USB-C memory sticks are often compatible with USB 3.2 ports.

The yellow USB port is another color that can indicate either USB 3.2 or USB 3.1 Gen 2. While the data transfer speed is the same as the red USB port, 20 Gbps, the two are not interchangeable.

Other Ways to Determine the Type of USB Port

Sometimes, color alone is not enough to determine the type of USB port. This is because certain manufacturers deviate from the conventions for USB port colors outlined above. In these cases, you can also look for other indicators of the USB port type.

For example, you can often tell the difference between USB 2.0 and 3.0 ports by looking at the shape of the port. USB 2.0 ports are typically rectangular while USB 3.0 ports are often square-shaped or have a wider opening.

Also, some USB ports will have an "SS" symbol next to them, which stands for "SuperSpeed." This is another indicator that the port is a USB 3.0 port or above.

Keep in mind that not all manufacturers use these indicators, so it's always best to check the documentation for your particular device if you're unsure which type of USB port it has.

Whether you're looking for a fast data transfer speed for your flash drive or the ability to charge other devices, the right USB port is out there for you. Now that you know the colors and meanings of various USB ports, you can more easily find the right port for your needs.