USB-A vs. USB-C: What's the Difference?

It's fascinating to think about just how many things USB ports and connectors allow us to do. For starters, we can store the equivalent of thousands of books on a USB flash drive and then access them at will. (Pretty cool, right?) But we also use USB ports for connecting everything from our mobile devices to our TVs to our computers, so it's fair to say that USB is among our most important connectivity standards.

However, USB connectors have gone years without a true next-gen evolution -- until recently. Now USB-C, the successor to the original USB-A connector technology, is on the scene and ready to shake things up. What's the story when it comes to USB-A vs. USB-C, and which type of USB hardware will be more appropriate for your application? Let's get connected with the basics of these crucial technologies.

USB-A at a Glance

USB-A is the original type of USB port that most people are familiar with. You've probably seen USB-A ports on your computer, TV, phone charger, game console, or any of the numerous other devices that use these ports. A USB-A port refers to a port in a host device that allows it to connect with a receptor device, either through a USB cable or by plugging in the receptor device directly (as with a USB flash drive).

Some things are classics for a reason, and USB-A ports are a great example. They've been popular for so long because they're versatile, reliable, and already installed in millions of devices around the world. USB-A technologies like flash drives have been ubiquitous for over a decade, and just about everyone uses devices that support them. USB-A also hasn't gone completely without upgrades in its time -- the USB 3.0 standard supports Type A connectors and provides transfer speeds that are still more than fast enough for most people's everyday needs.

However, the USB-A connector isn't without its drawbacks. Anyone who's ever tried to insert a USB-A connector into a port can attest that it can be frustrating to get it to fit just right. These difficulties happen because the bottom portion of a USB-A port features pin connectors that have to be lined up to power the device. In addition, the data and charging speeds that USB-A offers aren't always up to the requirements of applications that need very fast, high-capacity data transfer and/or charging.

USB-C at a Glance

It's time to meet USB-C, the next evolution of USB technology (more formally known as USB Type-C). USB-C devices feature a new type of connector that can provide power and data transfer at much greater rates. The basic technical standards for USB-C made their debut back in 2014, but the technology only started to receive widespread implementation in the late 2010s.

The first thing you'll probably notice about USB-C is that it's shaped quite differently from a USB-A port. A USB-C connector is much smaller, more rounded, and symmetrical, which means that it works no matter which way you insert the connector into the port. (Cue sigh of relief.) Although it features a different connector shape, USB-C is still backward compatible with USB-A devices through the use of an adapter.

However, there's a lot more going on under the hood of USB-C than just a more conveniently shaped port. The USB-C standard allows for a range of big improvements over USB-A, including:

One thing you should be aware of about USB-C is that the standard is still evolving. Numerous different standards, such as the USB 3.1 and 3.2 standards that we just mentioned, have been introduced. Thus, when purchasing USB-C equipment, it's especially important to check that it's designed for compatibility with the correct USB standards. Read up on the USB-C standards to make sure you understand them.

Wait, What Happened to USB-B?

From the lack of attention paid to USB-B, you might think it went the way of the iPhone 9. But USB-B does exist, it's just a more specialized technology that's not as widely used in general business and consumer applications. Instead, the most common applications for USB-B are in peripheral devices like printers and scanners. So, while it's still a relatively common type of connector, most people can go years without ever having to buy a USB-B cable.

A USB-B connection has a more trapezoidal shape that looks very different from either USB-A or USB-C. Devices with USB-B ports often connect to a USB-A port via a USB-B to USB-A cable. In addition, there are tons of other types of USB connectors, such as micro-USB and mini-USB, that have been developed for applications such as mobile device charging. USB-C is designed to replace many of these smaller connector sizes.

Now that we have some clarity on what USB-A and USB-C are, it's time to look at how they compare. Both USB standards have advantages to offer, and understanding those advantages will help you make the right choice.

There's no doubt that USB-C is gaining popularity, and it's quickly becoming one of the most important connectivity standards of next-gen tech. However, the changeover is happening slowly, and most experts predict that it will be several years before USB-C achieves the kind of genuine ubiquity that USB-A has. Ultimately, the decision will often come down to balancing the next-gen performance specs of USB-C with the accessibility and lower costs of USB-A.

If you need hardware or memory that's compatible with the widest variety of devices, USB-A is still often the way to go. Many people still don't have a device with a USB-C port, and it's not always practical or efficient to rely on the use of USB-A to USB-C converters. For example, a business buying wholesale flash drives will still often purchase USB-A flash drives to ensure the easiest compatibility.

USB-A, especially when designed for the USB 3.0 standard or higher, is also still more than sufficient for many everyday homes and office applications. Even photographers and other pros who need great USB performance are often perfectly fine with USB 3.0. If you need a good balance of performance, price, and accessibility, USB-A with USB 3.0 capability is the most common choice.

However, your application might require the enhanced features that USB-C provides, such as extremely fast charging or data transfer. In that case, it's probably appropriate to make the leap to USB-C hardware. With the stage set for a more widespread transition to USB-C in the next several years, an increasing number of businesses are finding that it's worth it to take the plunge on the superior performance specs of USB-C.

While the world is in this transitional phase between USB-C and USB-A it can be difficult to decide what's best for your project. While your desktop may only support USB-A, more progressive tech companies like Apple have been exclusively supporting USB-C since 2015.

That's where dual-headed flash drives come into play. These drives support both connector options. wielding a USB type A connector on one side and a USB type C connector on the other. These drives are especially useful for promotional campaigns where drives will be distributed to a large and potentially diverse audience who will likely use the USBs on a variety of devices.

C-ing the Future: What's Now and What's Next for USB-C?

OK, we're sorry for that pun, but it's hard not to be a little excited about the many new possibilities as USB-C continues to roll out. Tons of technologies are now taking advantage of the enhanced capabilities of USB-C. Some have already become almost ubiquitous, while others are still in their infancy.

Currently, the application where you're most likely to find USB-C connectors in real life is their use as charging ports for mobile devices and laptops. The incredible power capacity of USB-C (up to 240 watts with the latest Power Delivery standard) allows it to charge anything from a smartphone to a high-end laptop, which is why you'll also frequently find them on portable USB charging banks.

How about new tech that's on the horizon of the USB standard? USB4 is one recent development in USB-C technology with lots of potential for innovation. It's by far the fastest USB standard yet, with potential data transfer speeds of up to 40 gbps, although the competing Thunderbolt 3 standard is also just as fast. Those looking for the fastest USB performance around should keep an eye on USB4 and Thunderbolt 3, which are both likely to become more widely available soon.

Forever Curious, I have always had an eagerness to learn and understand new topics at their core. Naturally, I feel at home in the dynamic landscapes of web development, SEO, and all things digital marketing. Outside of the office, I can usually be found deep in an online rabbit hole exploring the latest marketing trends, pop culture, or politics with a podcast playing in the background. 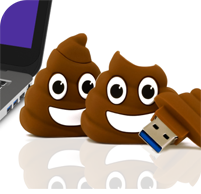 Cool and unique flash drives that are the perfect gift for anyone! 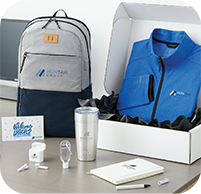 We print, store, pack, and ship your swag! 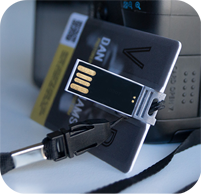 Shop our most popular styles for photographers!

Get A Closer Look >