We've all been there - trying to plug a flash drive into the USB port and utterly failing at connecting it the first time. Although you're already immediately frustrated, you still flip it around and encounter the same issue again. At this point, you start questioning life, but you insist on not giving up. Third times a charm - and somehow the USB drive plugs in with no problem at all.

What, how, why? It never makes sense, but somehow plugging in a USB device typically takes more than a second because of this odd dilemma.

While today most of us don't even think twice about the number of tries it takes to plug in a USB correctly, the question of why the USB connector was created to be so difficult to plug-in still remains. Of course, until now.

The real reason the USB connector wasn't made reversible was revealed in a recent NPR interview with Ajay Bhatt, the head creator of the IBM team responsible for the existence of the USB standard. Bhatt recognizes the large frustration that USB users, no matter if it's a flash drive, computer mouse cord, or phone charger, encounter when plugging it in.

So after almost 20 years of the USB device's existence, why is it designed in a way that makes it so troublesome to plug-in?

According to Bhatt, while his team was aware of the lack of reversibility, they knew it would require extra wires and circuits. Meaning that the cost of creating a flash drive would double. They also didn't want the price of their final product to be so high that consumers wouldn't purchase it. At the time, Bhatt and his team only had a certain budget to work with. They even toyed with the idea of creating a circular design for the USB connector, but at the end of the day, it wouldn't work as well as the rectangular design.

The 50-50 chance of plugging a USB device in right was the teams' only option, and they were willing to face user annoyance. Their main task was to prove to large computer companies like Apple that they should incorporate USB ports into their products. And they were successful in 1998 when Steve Jobs, head of Apple at the time, introduced the world to the first iMac with USB ports.

Today, you don't see a computer without a USB port. Bhatt and his team's design has made such an impact on technology it's hard to be mad at them for the slight plug-in delay. While they never changed the design of the USB connector, in recent years a new version, USB-C, offers the reversibility Bhatt's USB model never did.

Where does USB-C stand?

The USB-C connector offers many benefits that the Type-A and B connectors Bhatt and his team designed don't have at all.

Besides fixing the obvious problem of reversibility, USB-C is also smaller and thinner. In the ironic world of technology, where we want larger phones and TVs, we also want to downsize to smaller plugs. If you have a smartphone, you most likely have a USB-C connector that plugs into your device to charge it. 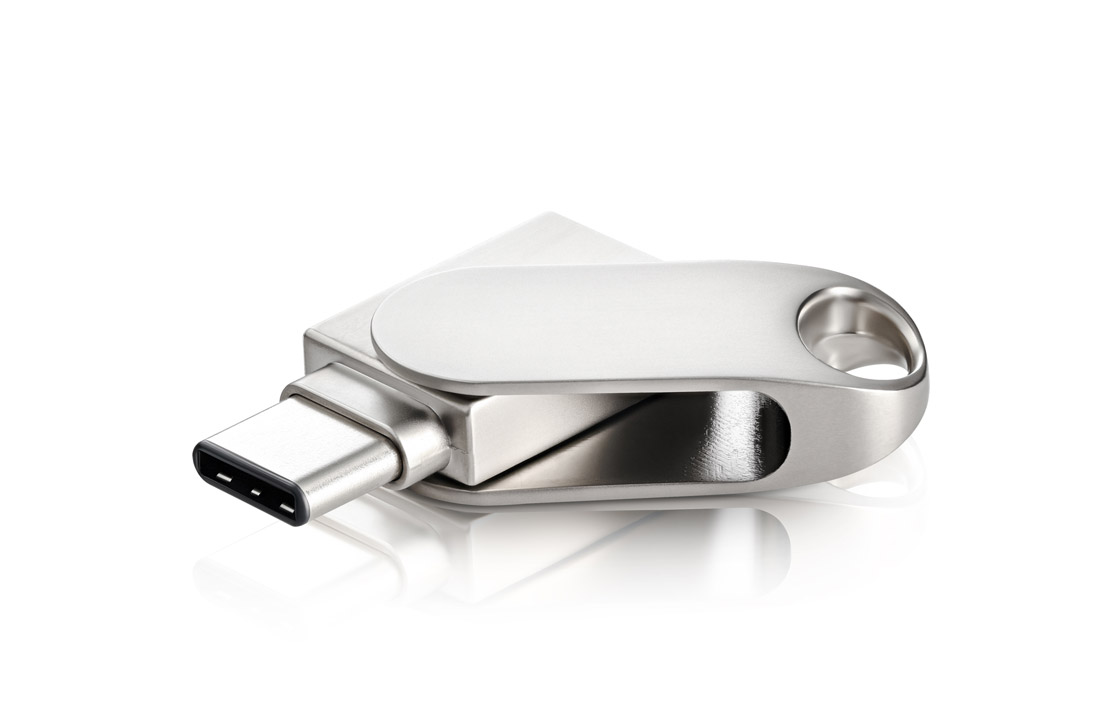 An example of a Type C connector on our reversible Ubie Ninja custom flash drive.[/caption]

Two other important factors of the USB-C connector is power and speed. Using USB 3.1 standard, Type C USB ports are able to produce up to 100 watts of power deliverability. Meaning it can power larger devices such as a printer with the cable connected to a computer. No previous USB specification has incorporated this amount of power delivery before. USB-C can also transfer data at a rate of 10bps, making it much faster than USB-A or B types.

While USB-C looks like the obvious winner in today's USB world, why do we still hardly see it being used?

The real reason is that so many older devices being used today only have Type-A and B ports on them, which eliminates the use of Type C unless with a separate USB hub that has multiple types of ports. Of course, new devices that come out will offer USB-C plugs, but most likely will also keep the original connectors to work better with the general user who has way too many Type A and B plugs as it is.

As time goes on, USB-C will be seen more and more. In the flash drive world alone, the USB-C connector is starting to see high demand. At USB Memory Direct, we love USB-C so much that we created a custom reversible flash drive with both Type A and C connectors on it, otherwise known as the Ubie Ninja (which you can learn more about here). We wanted users to have the ability to use their flash drive in the USB port they have accessible, hence the two drives on one device.

The Future of the USB

Now that the truth is out, we finally understand the faults in the design of the USB device that has made an excellent joke for so many years (cue the memes!).

Much like all tech devices, the USB will continue to evolve as it has from Type A, B, and C. As of right now, the USB isn't going anywhere. It's still popularly used for not only storing data but also as a connector for so many popular devices.

One piece of advice we can take from Bhatt's NPR interview is that "when you get a lot of opposition, you got to feel that you're working on a problem that needs to be solved." Without the determination of Bhatt and his team, our company wouldn't be here today creating cool flash drives like these for our clients to market their business with. We are very excited to see how the USB continues to grow in the future.

As the Content Manager of UMD's marketing team, my main tasks are executing written content and running our social accounts. I have been writing for years and love it so much that I got a Bachelor's degree focused in it. While writing for a technology company is relatively new to me, each project has been a huge learning experience.