Making of the Cryptex Flash Drive 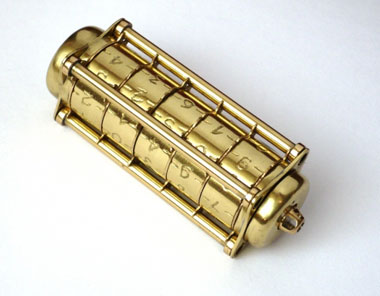 We are always brainstorming and on the lookout for new ideas that we can apply to the USB market place. We know there are lots of people, like us, who enjoy the various novelty and gadget flash drives that are commonly found online. That's why, when we happened across a photograph of a functional, cryptex USB drive, we were all instantly transfixed on acquring one. The drive was designed in "steampunk" style, a popular sci-fi theme that fuses Victorian-era design with modern technology. The drive is made from a few dozen individual parts, made of copper and brass. It features 5 wheels with etched digits, which allow you to set a combination and lock the USB drive within. With 5 digits, there is more than 59,000 unique combinations, which is sure to deter somebody from trying to figure out your password! Through our initial research, we found out that an engineer in Russia was responsible for the design, and that it was a one-off product. Knowing now that we couldn't buy one, we started looking into the next best thing: making them ourselves.

First, we did some market research by showing people the picture asking them what they thought about the drive. The response was impressive, as people began sharing the link and sending us loads of comments and ideas. Our landing page for the cryptex drive has collected over 6000 emails from potential customers, many of whom also left comments with ideas they have or just general messages of support. It was clear that we were not the only ones who wanted one of these hanging from our keychains, but as we soon learned, the logistics and legalities of producing a product like this was a bit more involved than our usual projects.

What followed was months of phone calls, emails and meetings with designers, legal consuls and patent attorneys. The designer was outside the United States and there were no patents for this exact design, but a well established company with a reputation to uphold, we decided that we would only go through with production if we could do it the right way. As of the date of this article, we are closing in on the start of production. All parties involved are cooperating and we are confident we will reach a final agreement soon. We hope to start production sometime in December. Projected costs of the drives are approximately $40.00 for an 8GB or $47.50 for a 16GB, though we won't know for sure until they are ready to go into production. If you are interested in getting one for yourself, it's not too late to fill in your information and own one of the first edition cryptex flash drives! Remember to like us on Facebook and tweet about it on twitter to help get the message out. The more interest we can generate prior to production, the bigger the run we can produce, and the lower the cost per unit will drop.