USB Memory Direct recently had the pleasure of collaborating with A. Miles Davis and his Kickstarter project titled, "DodecaheDRONE". We helped him design and preload his own business card custom usb drives to distribute to his customers and backers once his project reached its funding goals.

DodecaheDRONE is a modern role-playing game (RPG) set in a post-apocalyptic future. An RPG is a game where the participants take the roles of characters in a fictional setting. Players act out these roles within a narrative, either through acting, or through a process of structured decision making or character development.

DodecaheDRONE is set in a Tabletop RPG set in the far off future. In the developer's own words:

The world has gone to hell after nuclear war. It's up to the Drones to protect and enable their humans in rebuilding civilization.

In DodecaheDRONE, you play as one of 12 types of robots, called Drones. These Drones each come with their own unique special abilities and characterizations. With mankind virtually on the brink of extinction due to nuclear warfare, these Drones were tasked with operating and maintaining a human cloning facility. The purpose of the facility is for the Drones to help humans rebuild society and repopulate the earth. Three Laws of a Drone:

A drone may not injure a human being or, through inaction, allow a human being to come to harm. Humans mutated through prolonged exposure to radiation and mutated breeding are no longer classified as humans. Despite overt danger, humans willing to leave the Stay-Tech Automated Facility (STAF) are permitted to do so when there is no clear and present danger other than ambient radiation.

A drone must protect its own existence as long as such protection does not conflict with the First or Second Laws. The STAF is part of the drone's existence and must be protected accordingly. Protection of the STAF authorizes redefinition of "injure" to exclude nonlethal force.

In addition to operating a cloning facility and dealing with the psychology aspects of human societies, the Drones must also weather the dangers of the outside world. DodecaheDRONE is about exploring the barren wastelands of this post-apocalyptic earth and help find a way to restore it to some form of normality. A "creations protect their creators" plot, it reminded us a lot of the Mad Max/Fallout type of scenario meets I, Robot and a hint of The Matrix.

We were really excited to get to work with such a creative endeavor and suggested that Davis work with our business card promotional flash drives for the job. 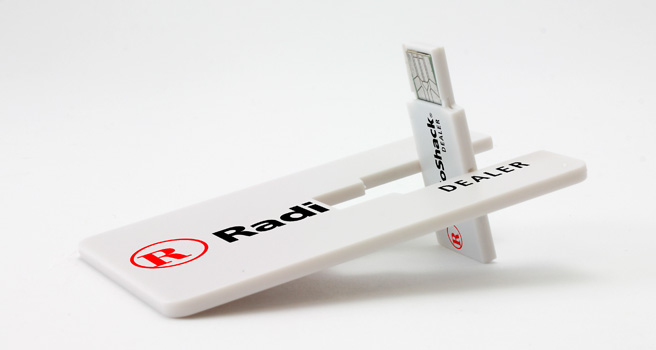 When you first take a look at these drives, you'd mistake them for any old business card or credit card. But at second glance, you can pop open one of its edges to reveal a small usb connector. Made from an ultra-durable plastic coating, these personalized business card flash usb drives are the perfect way to load up valuable information you want to share with your customers.

I've sorted out a great deal with the folks at USB Memory Direct to help me print business card-like USB drives," says Davis. "Each will have the Left of the Moon logo on it, and all the $60+ backers are getting them. This is a really cool way to deliver a digital product and I'm excited about it.

Why People Love Them

No other customized usb drives will give you a larger print area to work with. Business card flash drives also give you the opportunity to make your logos really pop out or even use professional photographic artwork. Its slimmed out design also allows for extra portability in wallets, pockets, purses, and more! Business Card USB Drives have the potential to attract more attention from potential users, customers and clients since its shape is a departure from traditional, rectangular flash drives.

Don't forget about our USB Data Preload feature mentioned earlier. With data preload, you can pre install important documents, files, and media for your customers. Davis decided to preload his with extra content related to his tabletop RPG, but you can also upload PowerPoint presentations, QuickTime movies, restaurant menus, service brochures, product catalogs and much more!